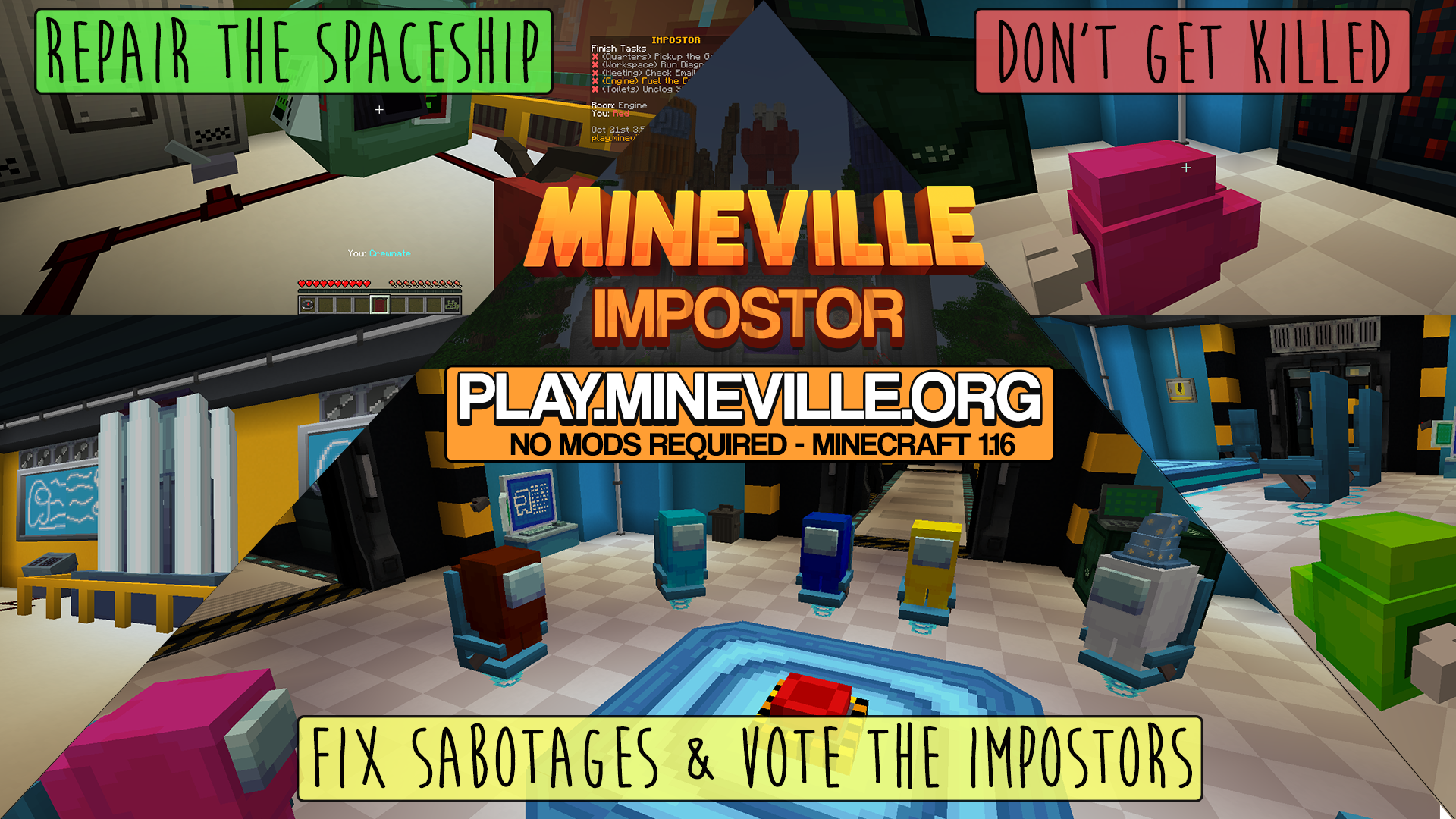 Hello everyone,
We have very exciting news to share. MineVille is ready to release its first minigame: Impostor. We have been working really hard, defying what was previously thought to be impossible within the limitations of vanilla Minecraft, to create an experience that will differ from any other minigame you have played on Minecraft: Java Edition. Impostor is a Minecraft spin on the popular game Among Us. While it is designed to uphold the overall structure of the original game, it also introduces necessary changes to make the game more fun and suitable for Minecraft players.

➥ HOW TO PLAY
Hop on PLAY.MINEVILLE.ORG on the latest version (you can choose to play with versions no lower than 1.14) and make sure to accept the resource pack. You will only have to download the resource pack once. You do not need any mods to play Impostor. Use the selector in the hub to join one of the Impostor lobbies.

When you join a game, you will be assigned one of two roles, Impostor or Crewmate. Crewmates have to complete the tasks they are assigned as fast as possible while the Impostor(s) try to sabotage the spaceship and kill them off without being detected. Crewmates are able to report dead bodies and initiate Emergency meetings when they think they have seen enough evidence against one of the players. Be cautioned that you will only be able to call 1 emergency meeting during a game (excluding meetings from reporting dead bodies).

There are currently 6 game types. 3 Public and 3 private. For the public games, there are games of 10, 7, and 5 players. If you are the leader of a party, your members will follow you to any public game you join.

To create a 10, 7, or 5 players private game, the party leader must be a VIP player and they have to click on the private NPCs themselves. A private lobby will be created and all party members will be sent there. No other players will be able to join.

​
Pre-game Lobby
You will have to wait in the pre-game lobby before the required minimum amount of players i met. Once there are enough players, a 30 seconds countdown will being for the game to start. In the pregame lobby you can choose a skin & color (VIP Perk), and choose a hat (VIP Perk), or return to lobby.

Congratulations to the top voters! You will be receiving the giftcards in your /mail. /mail read on Fire Skyblock to find the code.

Water payouts will be given to the top islands on October 19th (1 month after the initial release).

We will see if they retain their spots on the 19th!

| UPDATES AND HIGHLIGHTS THIS MONTH

Water Skyblock season 8! A new exciting skyblock season has been released. This season will last 3 months with awesome rewards for the leading islands! Your island has a chance to win money and giftcards by being istop 1, 2 or 3. (Total: $1,000 PayPal & $250 Giftcards) Our biggest payout yet! We are looking forward to a very fun and competitive season. Read everything about the new season here: https://mineville.org/threads/water-season-8.3904/

MineVille is fully running on 1.16! That means every realm has all the 1.16 features such as the updates nether, ancient debris, new mobs and netherite tools.

70% OFF in the store for a limited time only! Make sure you take advantage of it
before it ends!

​
Hello everyone,
We just released a major Kingdom update. Please read the following changelog to know everything that changed, got added/removed. We also fixed all bugs reported by players & staff.